"Hi, my name is Sofia. I am a member of the Monterey High Schools Key Club! At august DCM we discussed everything happening within the next few weeks, cheered, had fun, and made cards for children in hospitals. I honestly had so much fun because the MHS key club is fun and energetic and we got to rekindle before the school year started. I genuinely had fun and it was great to come together and help out the community."
- Submitted by Sofia Favaloro, Monterey, Member (Aug 2019)

lunch at the libraries 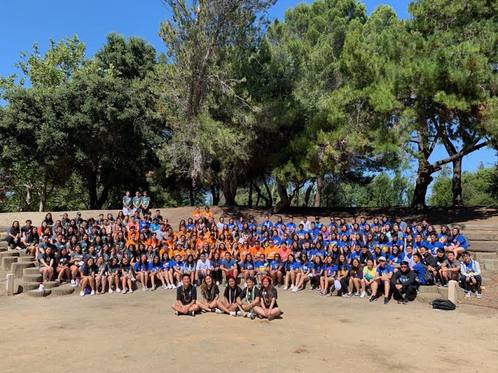 "You should join Key Club- it’s a fun experience and if you don’t like it at least you could say you tried it.” This was said by one of my close friends at Marina High School, and I can’t thank them enough for encouraging me to try a club that loves to help others and expresses positivity 24/7. I recently joined about 3 months ago and have enjoyed every moment so far. At one of our Key Club meetings, I was informed about an event known as the Key Club Training Conference (KCTC). Our president highly encouraged each member to come, and she claimed that we would not want to miss it. Me and my friends then came to the decision of signing up, hoping we would have a good time. The day of KCTC then came faster then expected as time flew by fast. The event was held at Central Park, Santa Clara. Once we arrived, I was immediately overwhelmed by the amount of people attending this conference as it was awesome to see so many people from different divisions in Key Club. The event then started with us splitting up and getting into a group of people we don’t know. I was a little nervous at first as I am a very shy person, but I got over it quickly as the people there were really friendly. After we had gone through a few icebreakers we then went into assigned groups and went to six different Key Club workshops. Each group spent 12 minutes at each workshop and we learned things such as how to profit on fundraising, how to improve your time management, how to become a confident leader, and more. I really liked this part of KCTC as I had the opportunity to interact with people I’ve never seen before and I actually made some new friends along the way. After the workshops we then started to participate in fun activities with our groups for about 2 hours- this was my favorite part, as I made memories with the people in my group doing challenges such as transporting water from one side to the other while being blind folded. After the activities, the event then ended with each group having to plan a skit in about 12-15 minutes. We then presented all of our skits and had a good time laughing at each other’s creative scripting and storytelling. Once the skits were done, KCTC unfortunately came to an end. We all took pictures with one another, swapped social medias, said our goodbyes, and then called it a day. I have absolutely no complaints about this event as it was executed perfectly and much better than I expected. I hope to participate in a lot more Key Club events as time passes by. Overall, KCTC is an event you do not want to miss out on as I had a fun time making new friends and learning more Key Club member values along the way."

- Submitted by Josiah Osorio, Member, Marina (June 2019)
Want your service event included on the highlights page? Talk to your club officers about sending in articles and visuals to the DNE, or contact the DNE directly via email.